The Effect Of Housing, Land, And Property (HLP) Rights On Women In Extraordinary Conditions 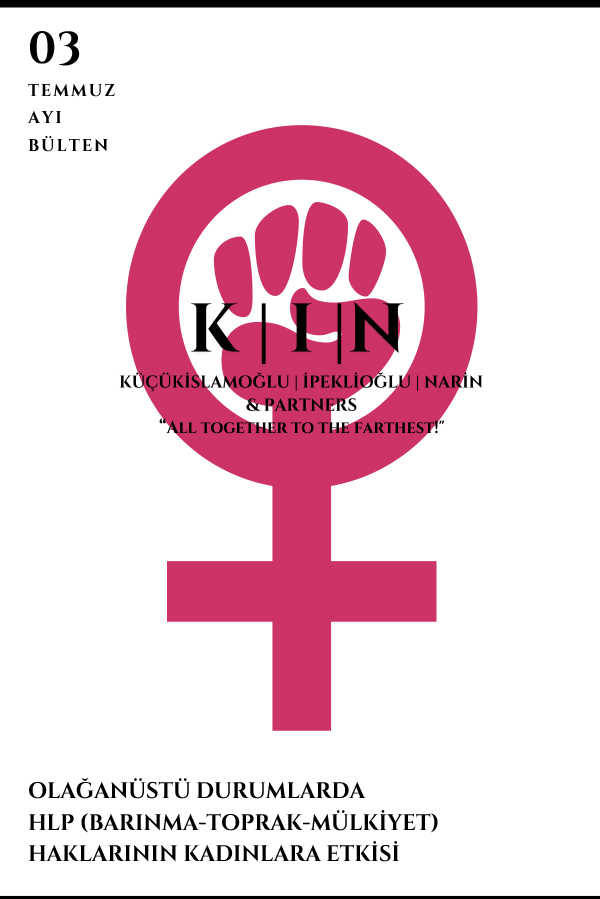 In many parts of the world, women and girls are disadvantaged with limited economic assets, education and job opportunities, and it is a fact that once the crisis is over they will find themselves behind the old normal healthy world. Many women work in the informal sector and do not have access to job protection, social security or insurance structures. In the epidemic, we can say that among family members, women take more responsibility than men. In addition, with the implementation of quarantine and restrictions, violence and oppression against women have increased.If we look in terms of assets; Land and property rights of women are very important. Because world-wide land; it provides a basis for security, housing, income and livelihoods. However, land rights are not equally distributed to all. This is especially true for women. Women in
underdeveloped and developing countries still face persistent barriers to land rights, including legal barriers, in about 40 percent of countries.

Therefore, legal regulations that indirectly lay the groundwork for theabuse of women even under normal living conditions, are largely abused in emergencies such as COVID-19. According to the Norwegian Refugee Council, what are HLP Rights? Housing, land, and property (HLP) rights are about having a home away from the fear of forced eviction, and the goal is to establish aplace that offers shelter, security and the ability to provide livelihoods.Discrimination during tenure leading to gender equality assistance, loss of legal documents, access to shelter and livelihoods, access to natural resources such as water, land and property conflicts, forced evacuation,extradition and discrimination, especially of women and children, such as COVID-19 are common HLP problems that occur in emergency situations. Many people around the world are forced to move from their houses whenever there is an outbreak such as war, armed conflict,natural disasters or COVID-19. In this extraordinary situation, sheltercan be one of the most difficult issues. When the crisis is over, they may find their houses destroyed by others or rendered unusable by harsh conditions. HLP rights arising from international humanitarian and human rights law ensure that displaced persons have a safe home without evacuation.

On the other hand, how do HLP rights affect women? Even before an emergency occurs, women are at a disadvantage when it comes to HLP. Land ownership is largely restricted to men by both tradition and law. Conflict worsens these inequalities and negatively affects women in many ways. Women's access to HLP is usually through inheritance or marriage. However, it is rejected by families and communities that follow traditions that limit women's When displaced women return home, they can be thrown out by their families and even lose custody of their children. Women who do not have secure HLP rights may face impossible options between staying in a bad relationship or leaving home or being homeless.

The HLP may be the only economic asset that displaced women have.There are few real options left to many, but HLP is an important point in challenging their families and communities to gain independent access to these assets. While the NRC gives priority to supporting these women to claim their HLP rights, the NRC co-chairs the Housing Land and Property Responsibility Area under the Global Protection Cluster. the article of VICTORIA STANLEY and PAUL PRETTITORE published in the World Bank Blog; Previous epidemics and postconflict or post-disaster situations have shown that women are denied HLP rights to uphold their rights. During the AIDS epidemic, women and orphans whose husbands had died lost their property to other family members and became homeless even while dealing with their own health condition. Also, there is some research that shows that when women become widowed during the Ebola crisis, they are at higher risk of being deprived of their rights.

HLP is very important for limited assets. Many women whose husbands or fathers have died lose their property to male family members. Because men have embraced that their existence culturally recognizes rights only through their gender. There is no basis for this in developed countries. However, underdeveloped countries such as
Kenya have a social and cultural life order that is considered more valuable and viable than the legal life order. In countries that have not yet fulfilled their economic capabilities, the priority is to address physical hunger rather than legal remedies. We can say that economic and physical hunger is one of the most important
reasons why gender inequality still exists in the world. However, if we accept that any challenge in the world cannot be used as an excuse for
people to set aside their moral and ethical values, extreme situations such as poverty or epidemic across the country should not be taken as an excuse for physical and psychological violence against women. On the other hand, women are at higher risk in traditional, polygamous, or informal marriages because the legal existence of HLP
depends on formal marriage. Therefore, women are often dependent on their male relatives to access HLP. Due to the death of male relatives
from the epidemic, limited legal protection, lack of documentation and restrictive social norms can be cited as a cause, and women's security time may be further weakened.
If we give a few examples of the current situation in the world,
without any distinction of criteria; Bosnia - Thousands of Immigrants Trapped In Tent Camps Massimo Moratti, Deputy Director of Europe, Amnesty International, who released an explanation after the authorities of the Canton of Una-Sana in Bosnia and Herzegovina decided to forcefully send and leave thousands of immigrants living in the region to the tentcamp in Lipa, said: “It is inhuman to send people, many of whom are already vulnerable to the disease, to the tent camp set up far away from the region, without providing water and cleaning facilities, places where they can be alone, and adequate access to health services. This practice will increase the risk of disease and preventable deaths of people.

Being deprived of people in potentially harmful conditions cannot be justified by suggesting public health. At a time when the coronavirus epidemic continues, Bosnian officials must meet the needs of all excluded groups and provide humanitarian conditions. ”BD- Risks for Coronavirus Are Increasing for Children ın Immigrant Detention Centers US Federal Court Judge Dolly M. Gee decided to restrict the government's efforts to release children currently detained at the Immigration and Customs Enforcement Bureau (ICE) and the Refugee Resettlement Office (ORR). Refugee and Immigrant Rights Researcher, Denise Bell, Amnesty International's US Branch, who released a
statement on this, said: “We still do not know how this pandemic will affect children. But there is one thing we know: Under no circumstances should children be detained because of their immigration status. The risks increase more every day a child is detained. Children have been detained by ICE for a very long time in insecure conditions without adequate personal hygiene, physical distance, proper health care, and even access to the Covid-19 test. Rather than being taken as part of intelligent and human
planning in efforts to prevent the spread of the outbreak, children are given secondary importance. What is even more worrying is that children are isolated or quarantined without any consideration of the psychological harm that they may experience in the long term. ”

CONCLUSION
There is no direct basis for HLP rights in international law.However, steps have been taken to protect women in various fields and to prevent gender discrimination;
ECHR The ECtHR has made parallel arrangements in many articles for the purpose of HLP rights. Accordingly, principle 3 begins with the recognition of the right to non-discrimination and provides for the right to equal treatment both legally and de facto to refugees and displaced persons. In the context of certain restrictions, this right is important in terms of the fact that displacement results from the deliberate discrimination of certain groups, in particular racial, ethnic, national and religious minorities. Therefore, these prohibitions will have the cumulative result of strengthening the future claims of displaced persons. With regard to the implementation of restitution programs, it is critical to maintain the right to non-discrimination, develop durable solutions to displacement, and ensure that the most marginalized
groups and vulnerable persons enjoy equal conditions for housing and property return. However, although the principles acknowledge that refugees and IDPs cannot be discriminated against and that equal protection must be provided within the framework of the law, this application for women does not occur in third world countries.

CEDAW
One of the nine United Nations (UN) level human rights conventions, the Convention on the Elimination of All Forms of Discrimination against Women (CEDAW) is the only convention that focuses on women's human rights and gender equality. CEDAW, which is also accepted as the international women's rights law, enables the states that have signed the convention to make a commitment to prevent any kind of discrimination against women, to improve the social status of women and to change their gender relations.

CEDAW
was adopted by the UN General Assembly in 1979, signed by Turkey in 1981 and entered into force in 1985. The signing of the Convention obliges States Parties to take concrete steps to eliminate discrimination against women and to regularly report and present state practices in the country on the promotion of women's human rights. The Additional
Protocol, signed in 2002 by Turkey in 2000 and entered into force with the approval of Parliament. The Additional Protocol gives individuals or groups of individuals the right to complain to the CEDAW Committee in certain situations where they have been subjected to gender discrimination and rights violations. In addition, the leading
third world countries are party to CEDAW on the violation of HLP rights, but the required reports are not produced in practice. So What Can We Do? The first step should be to apply comprehensive preventive measures to prevent anyone from losing their home during an epidemic,evacuation, inheritance, including those living in informal settlements.
In the long run, reforming inheritance laws and civil property regimes is important to improve the enforcement and enforcement of women's
HLP rights. It should be ensured that women can overcome the obstacles to access to the world in the world and they can skip this process as easily as men in extraordinary situations such as pandemic.